Around the world, thousands of projects that you’ve never heard of are racing to build the foundation of a technological revolution. These projects share a common provenance; they are all born out of an idea invented in 2009 by a peer-to-peer digital currency called bitcoin. Bitcoin’s big idea is a bit technical, but here’s a description: Bitcoin invented a decentralized network of untrusted computers that can self-regulate its own ledger of transactions using nothing but cryptography. Or, said without the jargon, bitcoin proved that a [bunch of computers] who [don’t trust each other] can [resolve all arguments] about [who owns what] using [just math]. This is a big deal, because it proves that the internet can trade value all by itself. It proves that the internet technically doesn’t need banks, corporations, lawyers, auditors, or governments. That’s right, bitcoin discovered a new superpower for the internet.

Fast forward to today. In this blog post, I want to highlight some emerging projects that demonstrate some amazing future potential. But because this technology is a bit new and complicated, we’re going to take a couple small steps along the way to get some context and learn some basic concepts.

Most people have still never heard of cryptocurrencies or blockchains. But that could change fast as news spreads at an accelerating rate. Here is the latest google trends report for “cryptocurrency”.

2017 has brought incredible growth to the cryptocurrency market. The overall market has grown from about $18 billion in January to about $400 billion at the time of writing. And it looks like growth may only accelerate this month as news reports discuss futures market trading for bitcoin.

The money is dizzying. Without a strong understanding of the technology, it’s tempting to dismiss the whole thing as a delusional fraud, as some people have. But before we jump to any conclusions, let’s cover some basics.

Here are some short definitions.

Blockchain: A Blockchain is a distributed ledger of transactions that uses cryptography to prove its validity.

Cryptocurrency: Money on a blockchain. Bitcoin is the most famous example.

If you want to dive deeper, there are some great visualizations of these concepts by ozy.com. Of course, even with a basic understanding of this technology, the rapid growth and evolution is still baffling. So whenever I feel overwhelmed by it all, I find myself searching for some historical perspective. And the best place to find that, of course, is retro youtube videos.

Historical comparison to the early Internet

Today’s blockchain hype feels eerily familiar if you think back to the early dot com days of The Internet. To jog our memory, let’s look at some youtube classics from the 90’s. Check out this news report from 1993. Or this AOL infomercial from 1995. Or this documentary about the browser wars of the late 90s. It’s fascinating to remember how revolutionary the internet was at the time and to remember how rapidly it changed our culture.

Today, the internet is practically absorbed into our everyday lives. But in the early 90s, people were struggling to understand this new intangible force. And in the late 90s, the booming wealth of dot com corporations was met with a clash of exuberance and skepticism. With this historical context, it’s easier to find a familiar drama in today’s news about blockchain and cryptocurrencies. We start to realize that something important is happening. We realize that even though we might be in a bubble, it’s clear that this new idea is here to stay. Like the internet, this new wave of technologies will survive bubbles and live on to change our lives. This sentiment is nicely captured in this recent interview with Albert Wenger (Union Square Ventures).

Now that we have some grounding, here’s the fun part. Let’s look at why this trend could actually be the biggest technological shift since the 90s internet boom. As evidence, here are some amazing projects being built today. I, for one, believe these are prototypes of a revolution in the making.

First, let’s start with bitcoin. Bitcoin is like “digital gold”. Bitcoin was the start of it all. But it won’t necessarily be the future. It’s a beautiful technology, but it’s young and it needs to solve a lot of problems to survive its rapid growth. For example, it uses too much energy, its transactions are too expensive, and the bitcoin community is not always aligned, which leads to destabilizing network forks. These are problems that the whole industry is working hard to solve. Whether or not bitcoin will be the platform to solve them is yet to be seen. But fear not, if bitcoin falls behind, there are many hungry competitors waiting to take up the charge.

There are many alternative cryptocurrencies besides bitcoin. They each have their own strengths. Here are a few of my favorites:

Litecoin: The “silver to bitcoin’s gold”. It’s faster and cheaper. And it has strong leadership which will help it evolve.

Vertcoin: Similar to litecoin, but with additional features that help it remain decentralized and community oriented.

Dash: Dash is quickly developing into a more user-friendly product than bitcoin. And it’s no accident; this evolution is aided by mechanisms built into the Dash network which reward collaboration. The network incentivises the community to contribute to development and growth. (Related topic below: see Aragon and “unstoppable organizations”)

Blockchain is not just for money. With a little extra code, a monetary transaction can be extended into a smart contract with arbitrary business logic. These contracts can rely on code and cryptography to prove that agreements are valid and enforced. These smart contracts can enable something called a Decentralized Application, or dapp for short.

Projects that run on smart contracts

Now, finally, we’ve gone far enough down the rabbit hole to understand how blockchains enable smart contracts, which enable projects that can change the world. (Note: This is a little simplified. A blockchain is actually just one model for building a decentralized network. But that’s a story for another time.)

Supply chain monitoring: Modum uses IoT sensors on a blockchain to ensure supply chain integrity for sensitive shipments. It could be especially useful for use cases like shipping medicine across international borders. By monitoring data like gps location and temperature, and by putting this data onto a blockchain, Modum creates a secure, tamper proof network that everyone can trust. This new kind of “trustless” data network has the potential to, in their words, “significantly reduce the 3 billion USD spent annually on logistics services within the industry.”

Medical records: Bowhead Health is one of the blockchain companies trying to fix the broken system that handles our medical records. Although their flagship product is actually a fancy pill-dispenser, I’m most excited about their long term plans to secure our medical records. Today, copies of your medical records are stored by hundreds of separate companies’ databases. These companies are each vulnerable to hackers. Your hacked medical records are 10x more valuable than your hacked credit card information. All of this is a recipe for disaster as we’ve seen through a constant stream of hacking. Does blockchain technology have a solution? Companies like bowhead want to get rid of these many, insecure copies of our healthcare data and instead encrypt them onto a decentralized network. This could put your own private information back into your control. You could update it and share it instantly to whomever you want whenever you wanted. Improving our medical records is just one of many problems that blockchain can address in healthcare. Oh, and by the way, the U.S. healthcare industry is worth more than $3 trillion.

Decentralized power grid: Grid+ Based in Brooklyn, this new kind of smart meter and blockchain energy market could help reshape our power grid. It’s a little complicated to explain, but this new technology will help decentralize our power grid into microgrids which will make it cheaper and more resilient to blackouts. The Grid+ payment network will incentivize more local solar power as microtransactions make it possible to arbitrage and ameliorate the wild fluctuations in supply and demand which hamper today’s grid and threaten blackouts. Exergy is another ambitious decentralized power grid company. They are launching their token soon and I’m very excited to see their progress.

And many more use cases than we can imagine…

There are so many other potential blockchain applications, and each one is exciting in its own right. Here are a few more of my favorite projects. Keep in mind that this is a somewhat arbitrary list, and many of these projects share a market with equally strong competitors.

Althea: Blockchain powered wifi mesh network. It’s hard to believe, but I think this technology will reduce home internet prices to almost nothing.

Aragon: A platform to enable decentralized, “unstoppable” organizations. Consider how wikipedia crowdsources content and moderation. Start with that, and then incentivise the whole thing with microtransactions, and then add other functionality like voting, task delegation, and every aspect of running an organization. That’s what Aragon is working on.

Numeraire: A meta-hedge fund running on crowd wisdom and AI. (Yeah, it’s crazy, but if it works, the financial world will lose their minds.)

Steemit: Social network on the blockchain

Welcome to the rabbit hole

Want more? Here’s the complete list of the cryptocurrency market.

Disclaimer: The author is an active investor in many of these projects. This is not investment advice. Watch out for falling objects. Don’t pet wild jaguars. Keep calm and hodl on.

A strong building depends on a strong foundation. A robust web application has similar needs. A good starter kit can save you time and keep your app healthy over time. 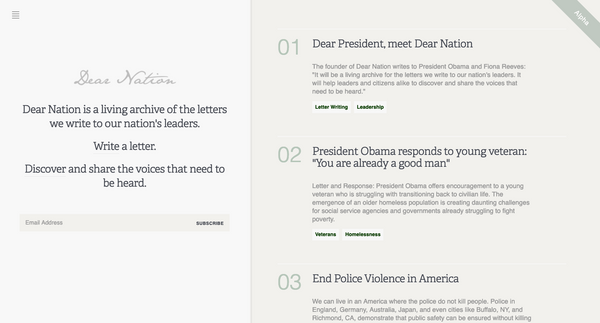 Dear Nation is a project demo intended to be a living archive of letters we write to our nation’s leaders.

Syllable Blog
—
Cryptocurrencies, Blockchains, & Dapps: Why billions of dollars are chasing after a technological shift as big as the internet
Share this